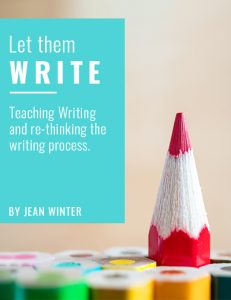 I know myself to be a writer.

No matter the format or my intentions for what I’m writing, I know that it’s through writing that my thoughts become clear to me.  When I write, I express not only what I know or what I’ve learned but also personal experiences in ways which are authentic to me.   I’ve come to understand how and why I write and  I also know that this was something which I had to come to by myself without support from any of my teachers.

When I first started teaching English

and had to deal with the Writing Process, I was angry.  It was not that I disagreed with the concept of the Writing Process.  It was that I had never been taught how to write using it when I was a student.  In Grade 9, I was expected to write a 2000 word essay in History.  I did not know how to organize an essay.  We were not taught about essay writing in class.  Naturally, I fell quite short of my teacher’s expectations which, I should add, I never knew.  I learned how to cope in high school but each essay was an onerous experience.  I was never satisfied with what I was doing because I never knew how to proceed. And each essay was returned to me festooned with red pen marks which only reinforced what I believed at the time: that I did not know how to write.

It was not until I was in my third year of university that I decided to try and understand how I wrote and under what conditions I wrote best.  I came to know my own preferred pre-writing, drafting, and revision processes.  After that, writing anything became easier for me.  But I was left wondering how many of my fellow students, both in university and in secondary school, were lost?  How many of them had become convinced that writing was too hard especially if the task seemed complex?  How many of them stopped writing?  How much of their insight and perception was lost because there was an over emphasis on product over the process of writing?

When I became an English teacher,

I was faced with Student Writing Folders which had been created by my board and into which student written work was to be placed.  As each piece of writing was dealt with, it was to be moved into a different section in the writing folder.  The expectation was that these folders would follow each student as they advanced through each grade, thus becoming a sort of portfolio of their writing in high school.  English teachers in my board were not given any instruction on the purpose of these folders i.e. why they were seen as a ‘good thing’, nor were we given any instruction on how to use these folders effectively.  For me, they were an encumbrance which imposed itself over me teaching my students how to write and supporting their efforts in that pursuit.

When I first began teaching English,

I felt intimidated by the writing process.  Thus, I taught writing using what I came to call a recipe format: students would complete each stage of the process before they would move on to the next.  I don’t know how my students felt about writing and I do know that I wasn’t happy with what I was doing.  It was not until I remembered what I had come to know about how I write and after much reading and talking with colleagues that I began to change what I did.  It was only then that I let go of any need for tight control over student writing and became ‘the guide on the side’ who encouraged and supported their writing.  And it was only then that I became aware of how my students grew in their belief that they could be effective writers.  That was such a great thing to see happen.

Why I know that helping students to see themselves as writers is important is because of my work not only as an English teacher but as a tutor in a local secondary school.

Coming to understand how I write and how I could support my students changed my teaching practice significantly.  I became a better teacher.

And my experience as a tutor working with students who are expected to use one organizational format across all subjects and adhere to the formalized rules of writing literary essays has made me even more aware that what I describe as the ‘standard writing program’ is still in place.  It still has a dampening impact on students as they work to understand how they can use writing to explain and to persuade.  It has been very frustrating for me as I help students who I see as hamstrung by the format and structure which is decreed by their teacher.  For example, I used to teach my students to write a three argument essay and to use as many paragraphs as necessary to lay out their arguments and express their thoughts and insights.  At the secondary school at which I have been a tutor, students are expected to write a 5 paragraph literary essay even if the paper would flow better with a few more paragraphs.  When I was working with one student on his grade 10 English essay, he created an 8 paragraph essay which flowed well and expressed his ideas effectively.  Further, by not forcing his arguments into only 5 paragraphs, readers would be able to follow this student’s arguments more easily.  However, knowing the format used at his school, I asked this student to check with his teacher to see if it would be acceptable for him to submit an 8 paragraph essay.  He was told that it was not.  Five paragraphs and no more.  To submit more than 5 paragraphs would result in the student receiving a low final grade on the assignment.  The quality of his argument and his ability to write were not deemed as important as adhering to the prescribed format decreed by his teacher.

I have put together what I have learned through workshops, discussions with colleagues, reading, and my personal experiences as a writer and as an educator. I have worked to encapsulate more than 33 years of learning, writing, and teaching writing for the potential benefit of all those who educate students.

By re-thinking the process and letting them write, you too can simplify your approach and empower your students to create their best work.

If you’re interested in exploring this, please go to www.jeanawinter.com. and check out Let Them Write under ‘Digital Downloads’.