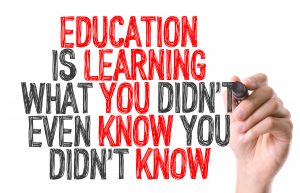 We’ve bought into the idea that education is about training and “success”,

defined monetarily, rather than learning to think critically and challenge.

We should not forget that the true purpose of education is to make minds,

not careers. A culture that does not grasp the vital interplay between

morality and power, which mistakes management techniques for wisdom,

that fails to understand that the measure of a civilization is its compassion,

not its speed or ability to consume condemns itself to death.

One of my friends shared this quote on Facebook.

As I read it, I remembered the 13 Goals of Education which were the underlying precepts for all publicly funded education programs in Ontario before Mike Harris’ Conservatives came to power.  The overarching philosophy of these goals was that the purpose of education was to help children learn to be self-reliant, know that they could ask questions and seek out answers, know that they could work co-cooperatively with others, and know that they could create new learning.  Nowhere in these 13 Goals of Education was there any mention of getting a publicly approved education in order to become a productive and good worker who would toe the ‘company line’ unquestioningly and who would accept being told how to be and how to think.  Nowhere was there any mention of kowtowing to what ‘experts’ and government decreed as what we need to know and what we should strive for.

And then, without significant consultation with educators in the field, or students or parents, these 13 Goals of Education were jettisoned in favour of a restricted curriculum which earmarked new and compulsory courses which were designed, it seemed, to create biddable consumers living in a materialistic world.  The goal of education was to encourage students to pursue a career rather than create the world in which they would choose to live.

And now, another Conservative government in Ontario has decreed that the acceptable limit for class sizes in secondary school will be 26 students which is a significant increase.

And all students who are working toward their high school diploma will be required to complete 4 of their 30 credits as e-learning.  Again, these changes were made without consultation with those who work with students.

Educators, students and parents have made their positions clear about these changes.  They are against them.  In fact, across the province, high school students walked out of classes one day in protest.  The unions which represent teachers and educational assistants have held rallies at Queen’s Park. And still, the Minister of Education [who was never an educator] has stated that these changes are for the better.  She has said that they will make students more resilient.

As an educator, I am more and more aware of the changes in education and which I do not believe are made to benefit students.

Rather, these changes seem to be designed to benefit politicians and their agenda and business which, we are lead to believe, wants workers who will do their job and accept the stratified world of big business where the ‘bosses’ decide who will do what and who will be promoted and what behaviours will be acceptable.  The underlying motivator for any change is money – putting more students through the system for less and less cost, creating a work force of worker bees who will do their jobs without questions.

When I think of the changes being put forward by government now, I am concerned for those students whose preferred learning style doesn’t fit into the learning style that our current educational system privileges.  With larger classes, they will not be able to ask questions and talk out their ideas with their teachers who, in turn, will have to cope with many more students in each class that they teach.  There just will not be enough time to help individual students.  I worry about how students who have any form of learning exceptionality [whether formally or informally identified] will be able to cope.  As they will not be able to access help to the degree which they need, I believe that many of them will just give up on themselves.  And that will be a great loss to our world.  As well, in order for schools to still offer courses in specialized subjects – classes which will have smaller enrolments for reasons of interest or safety, class sizes in the core subjects such as Mathematics and English will be larger than 26 students per class.  And it is often in these subjects where students experience the greatest learning challenges.  Further, I know that many schools nowadays do not have classrooms which can accommodate many students in one room.  There just isn’t the space for desks and chairs or tables and chairs to allow everyone in classes up to 45 students [the maximum cap allowable in the new law] to at least be comfortable while they are in class.

In the end, the only people who are going to reap the consequences of these changes are our students.

And as they feel the impact of these changes, our world will, in turn, be affected.

The world is changing exponentially with new knowledge and increasing emphasis on technology reflecting the fact that change can happen in what seems like a nanosecond.

Our students need to be able to work within that change – to be able to connect disparate pieces of knowledge into new gestalts, to be able to question and then find answers to their questions, to respond quickly to the changes they will encounter in their world.  However, the educational system, as it stands, reflects the idea that change is incremental and slow paced.  It reflects a world which no longer exists – a world where life was predictable and reliable and moved at a slower pace. This was the world that counted being ‘successful’ as having a good job with a guaranteed pay check where people worked until they retired and only then would they be able to make choices for themselves.  Being successful was managing and controlling our state rather than creating our state.  Being successful was being judged as a good worker, parent, student etc. and where someone external to each person judged what ‘good’ meant.

That’s just not enough anymore, if it ever really was.

Yes, students need to be resilient and that doesn’t mean so that they can survive larger classes and the current curriculum.

Our students need to be resilient so that they will know that they can, individually and together, deal with the demands of their world and that they can create the world in which they will choose to live.  They need to know themselves as creators not merely consumers.

When these changes proposed by the current Ontario government go into effect [as I fear they most likely will] and if they are not reversed, then our world will slowly become moribund.  As Chris Hedges stated:

it will condemn itself to death.